Melissa recently asked me to write a bit about some of my conservation experiences since my time as a Lennox Foundation intern last summer. Looking back over my first year in the bookbinding program at the North Bennet Street School in Boston, I found one particularly interesting project to share. While the curriculum at NBSS is mainly focused on traditional hand bookbinding, repair and conservation topics are integral to our daily discussion. The school is not affiliated with a library collection as a source of materials for treatment, however, individuals and organizations from the surrounding community often contact our instructors with books in need of attention. The result are book conservation projects that are a little different from the standard fare in a university lab. While we follow the same ethical guidelines for any item that we work on, the treatment priorities can be different for a single item from a private collection.

This past winter I was approached by a church congregation in Salem, MA to repair a 19th century quarto-sized manuscript volume containing over 100 years of church records. 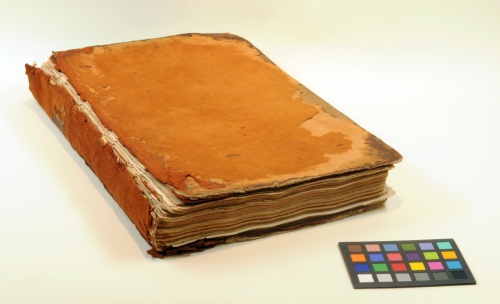 The original leather covering was severely deteriorated, giving it a kind of fuzzy appearance. Only a few blind tooling marks were still visible on the surface. Judging from the large areas of delamination, I would say that the original covering material was sheep skin.

This book had been repaired at least once before: two layers of leather were clearly visible at the spine edge.

The rebacked volume had a leather label at one time, but it was also so deteriorated that the titling was no longer visible. This could have been the original label, but it was impossible to tell. The new leather had been adhered to the spine with a thick layer of now hard and brittle glue. This had begun to fracture in several places from the stress of opening.

At some point during the volume’s life, the head edge of the textblock had been sprinkled. The edge decoration was still somewhat visible, despite the cockling of the pages.

The book had stuck-on endbands, which could have been added during the previous repair. The colored thread had completely deteriorated and only the white thread remained.

The front board was completely detached, and the lower board was hanging on by a single sewing support. Closer inspection confirmed that new endsheets had been added during the repair, as older paste-downs were visible underneath. 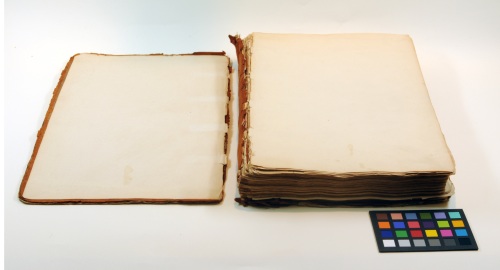 Either originally, or during a previous rebinding, the book was sewn onto four wide (~1.5 cm) vellum supports that were adhered to the inside of the boards. These had become very brittle over time and had each broken both at the joints and across the spine.

The sewing was also broken throughout the volume. Toward the front and the back of the book, many pages had been separated from their conjugate leaves, leaving a mass of single sheets.

After much discussion with the client about the item, I decided  to completely disbind the volume, mend the pages, resew the sections, and construct a new binding.

Although rebinding is a very invasive solution that I would not normally consider for an item of this age, after careful consideration, I determined most of the original binding material was completely compromised and that the preservation of the text was of a higher priority than the value of the structure as an artifact. This volume documents all of the births, deaths, marriages, and baptisms that occurred within the church community from the early 1800’s to the 1950’s. It is heavily used by members of the congregation and the wider community as a genealogical resource. Every bit of the text is important, and the extensive previous repairs are a testament to that continued use.

The failed structure posed a risk to the text from even minor handling. Individual leaves that had come free were torn and folded from shelving. Red rot from the leather was also beginning to discolor the corners of the pages. Since the paper was of high quality and remained quite strong, I felt that a complete rebinding would allow this set of records to act like a book again and be safely used for several more generations.

The process started by mechanically removing the old leather from the spine to expose the old adhesive and sewing.

A methyl cellulose poultice was used to soften the adhesive. The pieces of sewing were removed, along with the remains of the vellum slips, and the sections were carefully separated. Flags were also placed at the sections where page repair was required.

I should also mention that I had decided pretty early on against washing this item. So many different kinds of ink had been used over the years for record keeping, that I was concerned not only about the solubility of some inks, but about speeding up any corrosion from iron gall ink. As the paper was in very good shape, I decided that washing would do more harm than good.

Going through the book, I noticed other previous repairs.

The edge tears of the pages were repaired with lightly toned Tengujo Japanese tissue and wheat starch paste. The sections were guarded using a thicker Japanese tissue (Kizukishi). 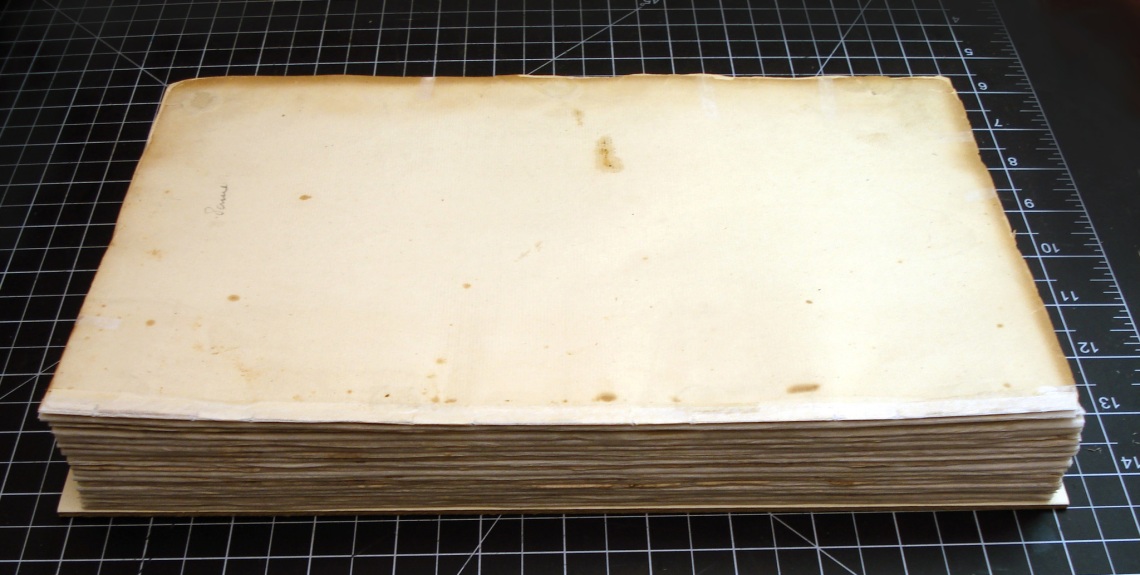 The book was resewn using the original sewing holes, but with linen tapes instead of vellum slips. New endsheets were also added. 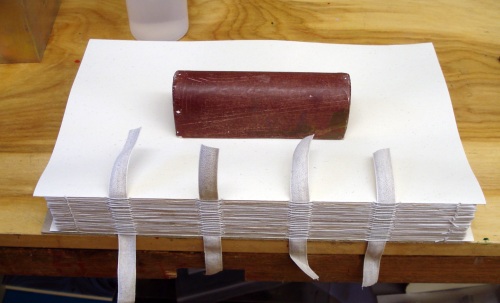 After sewing, the spine was glued up with pure gelatin and gently reshaped with a bone folder to achieve the original round and shoulder height.  Because the paper had good drape and the writing did not go into to the gutter, I decided that a slightly stiffer opening would reduce the stress put on the folds and sewing through the book action. To achieve this, the spine was lined with airplane linen and a layer of handmade paper. The resulting opening appears below.

The patron requested that the new binding not be leather, so I covered the new case in brown Canapetta bookcloth. This Italian, paper-backed cloth has a very satisfying texture and comes in a brown that is sympathetic to the original look of the volume. 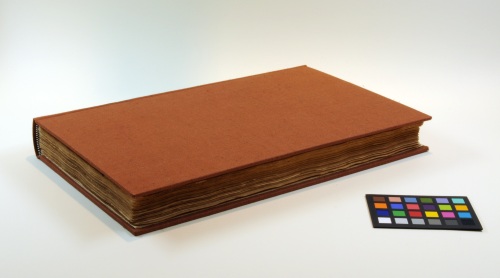 In the process of making the case, I built a label well into the spine piece and inserted a brown calf skin label, hot-stamped with gold foil.

I retained as much of the original binding material as possible to be kept with the new binding. The remaining parts of the endbands were placed in a polyester sleeve and the old boards were wrapped in paper. I made a simple enclosure out of corrugated board to hold the new binding, the old boards, and copies of my treatment documentation.

As a Lennox Foundation intern last summer, I spent a good portion of time learning to create treatment documentation in line with the high standards that the Parks Library Preservation Department maintains. At NBSS I have continued to write treatment reports and take high quality before and after treatment photographs of every item that I work on. The practice not only documents the item, but, over time, creates an interesting record of my experiences that I can share with others.

View all posts by henryhebert